Austwick is a small village situated mostly in the Yorkshire Dales National Park but with some parts in a designated ‘Area of Natural Beauty’.

It has very close connections with Eldroth, Feizor, Keasden, Lawkland, and Wharfe but also with the close neighbouring village of Clapham by sharing the Church of England Vicar who covers the four Parishes of Austwick, Clapham Eldroth, and Keasden.

Fortunately, it is relatively unspoilt and, although there are dwelling houses from different centuries right up to the present century, many still remain from earlier times with several dating from the 16th century.

Austwick has many interesting resident and visiting birds. The natural covering, trees, the old type of stone housing, and dry stone walls, give a wide choice of nesting habitats

Equally, it has an extremely rich variety of wild flowers, butterflies, moths, and insects a virtual paradise for those having an interest in nature.

The area is also one of great geological interest.

This photograph shows one of the many so called ‘erratic’ boulders to be found on Norber, overlooking the village of Austwick.

Austwick is a close community with residents cooperating together to keep  the village in a healthy state and to provide communal facilities. That it is also forward thinking is clear for when it was not possible to obtain a fast and economical connection to the Internet , it was one of the very first rural villages to set up its very own connection using a radio link. Fully researched by a resident, and constructed and put into action, using community volunteers that system is still in operation over an area of more than 50 square miles providing a radio link to the Internet via antennae to over 100 households, Austwick Primary School, and to several quite isolated sites where normal connection would be impossible. 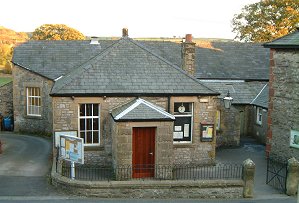